How to Increase Network Bandwidth without Increasing Cost

SD WAN or software defined wide area networking has gained some momentum in the past couple years and is getting lots of attention by marketers all over the country but what are the benefits and differences between MPLS technology and SDN technology? How can you increase you bandwidth without incurring additional costs? First lets look at the 2 WAN technologies we need to connect multiple sites…

MPLS or Multi-protocol label switching has been the Cadillac of private connectivity transport because of its reliability for delivery of packets and is security. MPLS generally offers excellent quality of service when it comes to packet loss and keeping business's most important traffic flowing. This reliability is especially critical to maintain quality of real time protocols in the network such as VoIP voice over IP or video traffic.

MPLS is known for its reliability because the technology uses labels which virtually isolate packets. Packets can then be assigned a priority giving the network a sense of predictability with pre-determined network paths.

The downside however of MPLS compared with SD WAN is cost. Except for in large metro areas MPLS can be expensive compared to broadband and other cheap Internet based transport.

The good news? Fiber has become cheap and available. Private MPLS connections with speeds as high as 40mb can be had for what we used to pay for T1s. It is likely that your branch offices unless is some remote tiny town will qualify for fiber upgrades that will give you more bandwidth for the same money you already pay. I've seen it time and again over the past 5 years.

SD WAN offers several benefits with MPLS networks. The core value proposition is that geographic boundaries and carrier footprints are virtually erased because SD WAN rides Internet for transport and can tolerate multi-carrier circuits. This means you can have a site in Jackson, Wyo for example that can only get bandwidth from mom and pop telco, the cable company, or 4G LTE and still provide encrypted WAN connectivity without high costs for back-hauled MPLS transport from a major carrier. It also removes the physical barrier of maintaining the network endpoints because all the brains and routing exists in the cloud via a controller that an administrator can access from anywhere. The hardware associated with SD WAN allows for multiple connection types and carriers which the software will load balance, fail over to the various connections based on need.

The down side is SD WAN uses a public network for transport meaning it inherently is less secure than MPLS. Where SD WAN fits well is in a hybrid network with MPLS to upgrade bandwidth in those remote offices where private transport isn't cheap. SD WAN can connect those offices back to HQ and then into the corporate network. SD WAN endpoints create connectivity using encrypted tunnels over the Internet and unlike firewalls they are controlled in the cloud by a web portal. The controller is cloud based in the MPLS carriers network and can be accessed from anywhere.

The costs savings with SD WAN comes from the ability to use broadband circuits such as cable, DSL, and wireless for connectivity. So you can either keep your lower bandwidth MPLS circuit and re-contract at a reduced rate and then add a 100mb cable circuit for less than $200 and consequently improve your bandwidth without incurring more monthly cost. 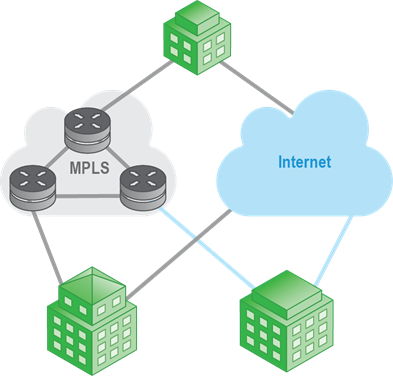 Private networks such as MPLS will always be in demand, particularly businesses that have specific connectivity and security requirements. Today many companies are finding a fit for a hybrid network that deploys both technologies depending on the location and what is available to each. When evaluating your wide area network weigh the pros and cons and determine which needs are paramount to your company network. There are many ways to get more bandwidth for the same money, set up a time with one of our engineers to learn more.